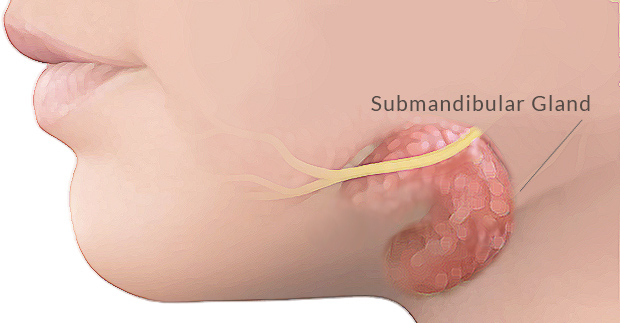 The submandibular gland may be removed for a number of reasons. The most common reason is recurrent infection and this in turn may be secondary to stones forming within the submandibular gland. There are other causes of sialadenitis (inflammation of the submandibular gland) such as bacterial or viral infections and Sjogren's syndrome. A tumour, which can be benign or malignant, is another reason to have the gland removed. Uncommonly, it is a procedure that can be undertaken to prevent drooling in those with cerebral palsy.

Special investigations may then be considered. Frequently, radiology in the form of an ultrasound scan or a CT scan is undertaken to further define the problem.

Both a fine needle aspiration test and an ultrasound-guided core biopsy may be employed to provide a safe sampling of the tissue of the submandibular gland. This enables a surgeon to obtain an accurate idea of the problem that they are encountering.

In the vast majority of cases, surgery is undertaken using general anaesthetic. An incision is made beneath the jawline and is designed to avoid injury to the nerve that controls some of the muscles of the lower lip (the marginal mandibular nerve). The gland is generally removed with its capsule and care is taken to prevent any bleeding from the numerous vessels around the gland. The duct leading from the gland into the mouth is also tied off. At the completion of surgery, a drain is inserted into the wound to collect any fluid and the edges of the skin are sewn together over this.

The drain is generally removed once drainage has settled to a minimum. The procedure is not particularly uncomfortable and if pain does arise, it can mean an infection is setting in.

If you have any questions about this surgical procedure please contact us.